Eric’s father is an accomplished director, and his mother a successful producer. His parents founded Showreel, which is now Shot Glass Films. He grew up with a camera in his hand in sunny Woodland Hills listening to Pink Floyd, Led Zeppelin, and the Grateful Dead.  Starting at a very young age, Eric has worked in all production roles… PA, grip/electric, and even production manager. He quickly evolved into a cameraman.  Today, as you may have noticed, he is SG’s director and director of photography.

Being with Shot Glass Films for nine years, I’ve experienced firsthand pretty much all sides of Eric. The battles of the business, his tenacity to succeed, his allegiance to his clients….his love for the simple things in life: good people, the smell of a fall day, and smoky barbeques with family and friends. He’s always on the go; he works hard and plays hard.

Eric really enjoys the creative process and thrives on collaboration with clients. Occasionally, I am able to also work with him on set and see the whole production orchestrated under his direction. The crew likes working with him because he’s chill and relaxed, although he does crack the whip when need be.  Eric is stern yet down-to-earth and will always, ALWAYS be honest with you. I think every director needs to have these qualities. 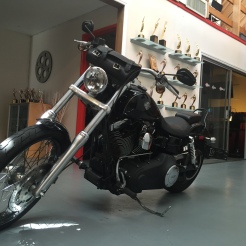 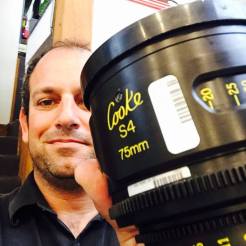 At the SG headquarters, Eric has the ideal parking spot: he drives his Harley Davidson right inside the office. We know Eric’s in the area when we hear his motorcycle engine rumble.   If you visit us and have a motorcycle feel free to bring it in; there is always room.

Eric tries to attend every Tequila Friday at Shot Glass. It’s a good time to unwind and connect on a personal level. After all, we really are a family here. His liquor of choice is Anejo Agave, preferably Casa Noble Tequila (or the purple bottle), although we’ve been known to go with Don Julio Anejo from time to time …can we say “shot glass”?  While we lean toward Tequila, occasionally we branch out to whiskey, beer.…and cupcakes if it’s someone’s birthday.

As a director, I think Eric’s work continuously gets better over the years. Eric is always on a quest to take the production to the next level. He knows his Sh*&*t; he knows our audience. Eric’s never satisfied, and I think that’s the sign of a true artist. He always finds a way to make something better, unique, and stand-out.

Outside of SG, Eric is watching as many sunsets as possible with his wife and kids. At home, his two teens, Emily and Justin, keep him on his toes. His wife, Felicia, is his favorite companion.  They ski in Mammoth every winter, and wakeboard in Lake Havasu every summer. Quick weekend getaways take him to the beach where he hangs in his Lance camper. Leo Carrillo Beach is his favorite, but only second to the City of Carpenteria.  He always says he just loves the small town feel of “Carp,” but I know it’s Island Brewery that keeps him going back. He also hasn’t given up the on Rock and Roll. Later this year, he’s going to the epic three-day event “Desert Trip” in Indio to see The Rolling Stones, Bob Dylan, Paul McCartney, Roger Waters (Pink Floyd), and The Who (among many others)!

In a recent meeting with the rest of the Shot Glass gang, Eric reminded us, “It’s all about making something memorable, connecting with your audience, delivering a targeted message on behalf of the client. Oh yea and don’t forget to have some fun. Life is short.”

Personally, I agree with him.

Lenses use glass to focus light into images. At Shot Glass we focus light to tell great stories. What's your story?
Loading Comments...
%d bloggers like this: