…What it’s like being a young producer, re-branding the company, and a new facility in development.

We wanted to give you a glimpse into our favorite reigning lady at Shot Glass, Jessica Ristic. It is not always easy, but to her it’s very rewarding to watch our company grow from a “mom & pop shop” to a major player in Los Angeles video production –with new blood and talent.

Since Jessica took charge three years ago, she has completely re-branded “Showreel International,” a 32-year-old production company, into… Shot Glass.  She’s been pretty busy to say the least, expanding our small shop into more commercial and branded content markets, managing major accounts for large organizations and Fortune 500s, and bringing on several new directors to diversify what we can offer our clients.

Oh– and she’s also overseeing the development of Shot Glass’ new multi-level net zero building which will soon break ground in the rapidly expanding Noho Arts District. It will include a sound stage and plenty of production space as we continue to grow.

As a young female CEO and Executive Producer, running a business can present challenges.  Following in her father’s entrepreneurial footsteps, Jessica became Shot Glass’ CEO and Executive Producer at just 26 years old.  With all this biz momentum, there are obviously some curveballs for Jessica.  In a recent interview with Voyage LA, she expressed that people often have a hard time taking her seriously, and assume that because of her age she’s not competent or experienced.  She has also faced varying levels of sexism and gender dynamics. “All I can do is try not to let it bother me and move ahead with confidence.”

Yet none of this has stopped her from leading Shot Glass into a successful growth pattern.  When Shot Glass’ commercial for CO2 Solutions aired during the Rio Olympics, the spot was very powerful in helping the company significantly increase its stock, while also promoting positive environmental messages to mass audiences internationally.  TITLE Boxing was also a knock-out, and received awards in branded content categories from the ADDY and Telly Awards. “Follow the Sun,” which promoted Los Angeles’ 2028 Olympics candidacy for Edison was also very successful.  We were really excited to be part of this project – because as you know, L.A. did win the bid for holding the Olympics! 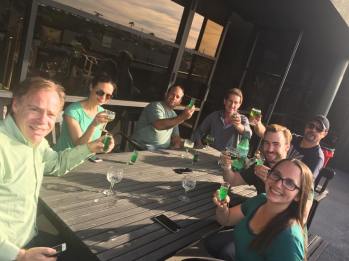 At the office – Enjoying St. Patty’s Day in our balcony.

On a personal level, at the office and when filming on location, all our staff and crew enjoy her easy-going, personable, and approachable nature. Sometimes we joke, and say she is the nicest person at the office because she is Canadian – & everyone loves a Canadian! Jessica is a super-fan of Games of Thrones, horror flicks, and overall filmmaking. A big Halloween enthusiast, she may be spotted this month dragging her husband, Aleks, to the many Halloween-themed events and parks throughout the greater LA area.  Jessica is also often found hiking in the Santa Monica mountains with Aleks and their cat, Ozzy.

Ozzy, sometimes he comes into work at Shot Glass. 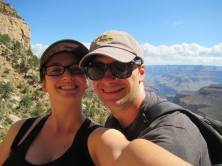 Adventure time at the Grand Canyon.

So, what’s next for Jessica and Shot Glass?

Right now she is focused on bringing in more commercial and branded content accounts, but her long term goal is to expand our services even further and create original narrative content, such as television shows and feature films.  She’s also on the lookout for a female director to further diversity our creative team roster. The industry is constantly changing, and there are always new production companies and creative shops emerging.  Staying ahead of the curve and delivering compelling content is an ongoing pursuit for Jessica and all of us at Shot Glass.

Lenses use glass to focus light into images. At Shot Glass we focus light to tell great stories. What's your story?
Loading Comments...
%d bloggers like this: